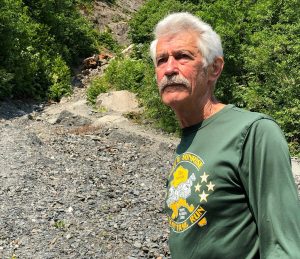 Fred Moore, long-time Seward resident, completed his first Mount Marathon Race in 1970, and he has finished every race since. On the completion of the 2019 race, at the age of 79, Fred Moore and the residents of Seward celebrated his 50th consecutive race. Fred’s achievement was deservedly featured by nearly every Alaska news channel and publication leading up to and after that milestone race.